I took this class Spring of 2011. The basis of this class was to learn and experience the user-oriented design process. I worked with a team of 3 other students from Olin College of Engineering. We went through an iterative process of interviewing, ideating, collaborating, participating, and prototyping.

The user group we designed for were Live Action Role Players aka LARPers. LARPers are groups of people who go out to fields or campsites and spend the weekend role playing. This role playing consists of various adventuring and acting through the eyes of a character they create. In a nut shell it is the real life version of the table top game Dungeons and Dragons.

Our final product was a system that would allow GMs to wireless communicate with the NPCs in order to keep the LARP exciting the entire weekend. This would allow the PCs to have a more immersive experience at the LARP. 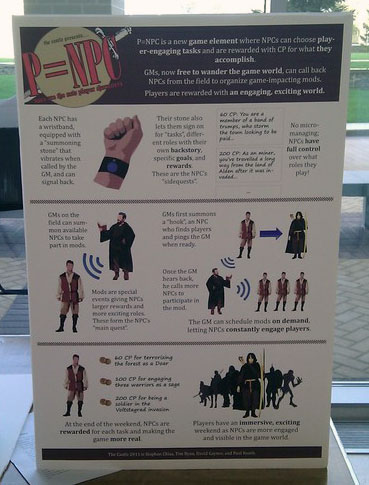